Will work for entire state, not just my constituency, says Nagaland Dy CM Patton ahead of Assembly polls

BJP to protest against Pinarayi government across State from Monday

California: Twitter rants are set to grow bigger.
The microblogging site's character limit might soon expand to 1000 characters from its previous limit of just 280 characters. CEO Elon Musk teased the update in response to a user's suggestion.
https://twitter.com/elonmusk/status/1597033573789618176?ref_src=twsrc%5Etfw%7Ctwcamp%5Etweetembed%7Ctwterm%5E1597033573789618176%7Ctwgr%5Ee881168f869559e20a61d4a7ccb07c00deb22ea7%7Ctwcon%5Es1_&amp;ref_url=https%3A%2F%2Fin.mashable.com%2Fapps-and-software%2F42705%2Ftwitters-character-limit-might-jump-from-280-to-1000
"It's on the todo list," Musk wrote.
According to a report by Mashable, Twitter was referred to as a "microblogging service" mainly due to its limit of 140 characters for its tweets. Eventually, the limit was increased to 280 characters in 2017. The news was announced on Twitter's official blog.
"many people Tweeted the full 280 limit because it was new and novel, but soon after behavior normalized.......We saw when people needed to use more than 140 characters, they Tweeted more easily and more often," the official Twitter blog read.
The character limit has been one of the prime differences between Twitter and other social media services.
Musk has shown interest in the idea of increasing the character limit on a number of occasions since his takeover of the platform, as per a report by Mashable.
On November 27, a Twitter user suggested to Musk to increase the platform's word limit from 280 to 420. 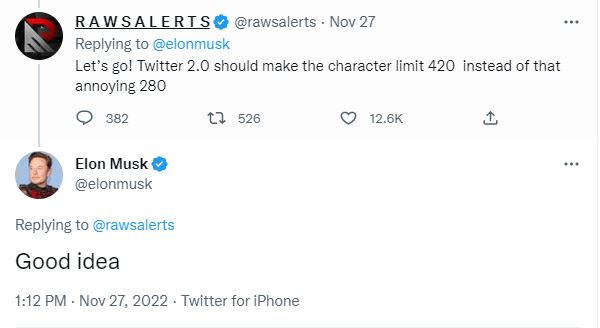 "Good idea" Musk wrote in response.
Prior to that, another user had suggested "get rid of character limits." 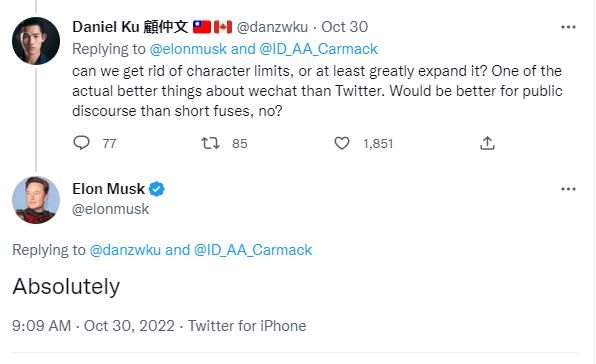 "Absolutely", the multi-billionaire responded.
Musk recently announced another major change for the platform with its multi-coloured verification system.
The three-coloured system would replace the previous 'Twitter Blue' service which had to be pulled off within days of its release due to rising number of accounts impersonating well-known brands and personalities while carrying the 'verified' check. (ANI)

No proposal to advise banks to provide cheap loans for el...

Nimrit and Priyanka have chances to Win!

“OTT ACTORS ARE NOT BEING RECOGNIZED”

WHY EVEN IN THE AGE OF AI, SOME PROBLEMS ARE JUST TOO DIFFICULT

Chidambaram says 'Sharjeel and others used as "scapegoats...

Will work for entire state, not just my constituency, say...